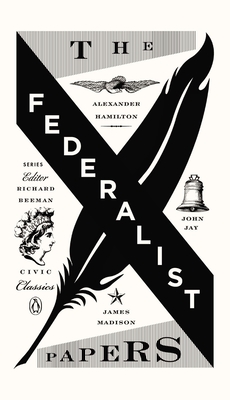 By Alexander Hamilton, James Madison, John Jay, Richard Beeman (Introduction by), Richard Beeman (Editor)
List Price: $15.00
Our Price: $13.00
(Save: $2.00 13%)
Should be on our shelves now -- but wait for confirmation from us before coming to pick up. We'll respond to your order shortly.

A selection of nineteen essential essays from The Federalist Papers in their original lengths by James Madison, Alexander Hamilton and John Jay, with notes by Richard Beeman

Penguin presents a series of six portable, accessible, and—above all—essential reads from American political history, selected by leading scholars. Series editor Richard Beeman, author of The Penguin Guide to the U.S. Constitution, draws together the great texts of American civic life to create a timely and informative mini-library of perennially vital issues. Whether readers are encountering these classic writings for the first time, or brushing up in anticipation of the 50th anniversary of the Civil Rights Act, these slim volumes will serve as a powerful and illuminating resource for scholars, students, and civic-minded citizens.

Written at a time when furious arguments were raging about the best way to govern America, The Federalist Papers had the immediate practical aim of persuading New Yorkers to accept the newly drafted Constitution in 1787. In this they were supremely successful, but their influence also transcended contemporary debate to win them a lasting place in discussions of American political theory. The Federalist Papers make a powerful case for power-sharing between State and Federal authorities and have only risen in legal influence over the last two centuries. Beeman’s analysis helps clarify the goals, at once separate and in concert, of Madison, Hamilton, and Jay during their writing, and his selection of some of the most important papers show the array of issues—both philosophical and policy-specific—covered by this body of work.

James Madison is frequently referred to as "the father of the Constitution" because of the important role that he played in the drafting of the US Constitution during the Constitutional Convention in Philadelphia during the summer of 1787. He also played a key role in drafting the Bill of Rights in the First Federal Congress in 1789. He later served as secretary of state under Thomas Jefferson, and succeeded Jefferson as president, serving two terms in that office and overseeing the United States victory over Great Britain in the War of 1812. He was the last Founding Father to die, in 1836, in Montpelier, Virginia.

Alexander Hamilton was born in the British West Indian island of Nevis sometime between 1755 and 1757. During the American War of Independence, he was captain of a New York artillery company and soon thereafter was promoted to Lieutenant Colonel, serving as George Washington's secretary and aide-de-camp. He was a delegate to the Constitutional Convention of 1787 from New York, Following that Convention, he organized the writing of The Federalist essays, enlisting John Jay and James Madison in the effort. From 1789 to 1795 he served as America’s first secretary of the Treasury. A growing animosity between Hamilton and his longtime New York political rival Aaron Burr culminated in a duel between the two men in 1804. Hamilton was fatally shot and died the day after their encounter

John Jay was a consistent voice for reconciliation with Great Britain in the Continental Congress. While he did not sign the Declaration of Independence, he later worked to secure support for independence in his home state of New York. He was an influential member of the peace delegation that negotiated the treaty of peace with Great Britain ending the Revolutionary War. Recruited by Alexander Hamilton to write essays for The Federalist, his effort was hampered by illness. He later served as the first chief justice of the Supreme Court. He retired from the Supreme Court in 1795 and served as governor of New York for six years before retiring to a farm for the last twenty-seven years of his life.

Richard Beeman, the John Welsh Centennial Professor of History Emeritus at the University of Pennsylvania, has previously served as the Chair of the Department of History, Associate Dean in Penn's School of Arts and Sciences, and Dean of the College of Arts of Sciences. He serves as a trustee of the National Constitution Center and on the center's executive committee. Author of seven previous books, among them The Penguin Guide to the United States Constitution and Plain Honest Men: The Making of the American Constitution, Professor Beeman has received numerous grants and awards including fellowships from the National Endowment for the Humanities, the Rockefeller Foundation, the Institute for Advanced Study at Princeton, and the Huntington Library. His biography of Patrick Henry was a finalist for the National Book Award.