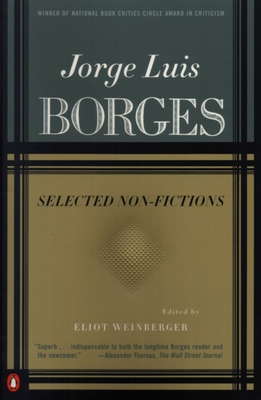 Winner of the National Book Critics Circle Award in Criticism

It will come as a surprise to some readers that the greater part of Jorge Luis Borges's extraordinary writing was not in the genres of fiction or poetry, but in the various forms of non-fiction prose. His thousands of pages of essays, reviews, prologues, lectures, and notes on politics and culture—though revered in Latin America and Europe as among his finest work—have scarcely been translated into English.

Jorge Luis Borges was born in Buenos Aires in 1989 and was educated in Europe. One of the most widely acclaimed writers of our time, he published many collections of poems, essays, and short stories before his death in Geneva in June 1986. In 1961 Borges shared the International Publisher’s prize with Samuel Beckett. The Ingram Merrill Foundation granted him its Annual Literary Award in 1966 for his “outstanding contribution to literature.” In 1971 Columbia University awarded him the first of many degrees of Doctor of Letters, honoris causa (eventually the list included both Oxford and Cambridge), that he was to receive from the English-speaking world. In 1971 he also received the fifth biennial Jerusalem Prize and in 1973 was given one of Mexico’s most prestigious cultural awards, the Alfonso Reyes Prize. In 1980 he shared with Gerardo Diego the Cervantes Prize, the Spanish world’s highest literary accolade. Borges was Director of the Argentine National Library from 1955 until 1973.

Eliot Weinberger (editor/co-translator) is an essayist and translator. His books of essays include Works on Paper, Outside Stories, Nineteen Ways of Looking at Wang Wei, and Karmic Traces. His translations include the Collected Poems 1957–1987 of Octavio Paz, Bortes’ Seven Nights, and Bei Dao’s Unlock. In 1992, he was named the first recipient of the PEN/Kolovakos Award for his work promoting Hispanic literature in the United States.

Esther Allen (co-translator) has translated numerous works from Spanish and French, including The Book of Lamentations by Rosario Castellanos.

Suzanne Jill Levine (co-translator) is the author of The Subversive Scribe and the biography Manuel Puig and the Spider Woman: His Life and Fictions. She is a professor of Latin American literature at the University of California in Santa Barbara, where she also directs a Translation Studies doctoral program. She has translated more than two dozen books, including works by Puig, Cortazar, Donoso, Sarduy, Bioy Casares, and Cabrera Infante.

"Dizzying in scope and dazzling in execution … Should throw even the most dedicated Borges fan for a loop." —The New Yorker

"Intelligently selected and magically translated … Borges's uniqueness in 20th-century letters is rooted in an almost monstrous combination: encyclopedic knowledge, razorlike critical judgment and a ravishing appreciation for the magical and pagan dimension in every situation."
—The New York Times

"A remarkable achievement, offering the general reader and Borges aficianados alike a rapturous glimpse into one of literature's most fertile and original minds." —San Francisco Sunday Examiner & Chronicle

"Sheer delight … witty and elaborate, in turn intimate and magisterial … his is the literature of eternity."
—The Times (London)