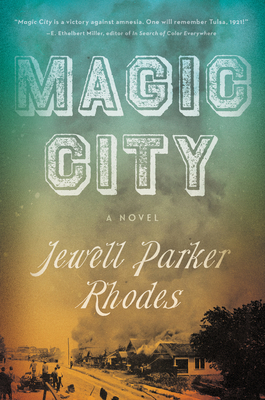 With a new Afterword from the author reflecting on the 100th anniversary of one of the most heinous tragedies in American history—the 1921 burning of Greenwood, an affluent black section of Tulsa, Oklahoma, known as the "Negro Wall Street"—Jewell Parker Rhodes’ powerful and unforgettable novel of racism, vigilantism, and injustice, weaves history, mysticism, and murder into a harrowing tale of dreams and violence gone awry.

Tulsa, Oklahoma, 1921. A white woman and a black man are alone in an elevator. Suddenly, the woman screams, the man flees, and the chase to capture and lynch him begins.

When Joe Samuels, a young Black man with dreams of becoming the next Houdini, is accused of rape, he must perform his greatest escape by eluding a bloodthirsty mob.

Meanwhile, Mary Keane, the white, motherless daughter of a farmer who wants to marry her off to the farmhand who viciously raped her, must find the courage to help exonerate the man she accused with her panicked cry.

Magic City evokes one of the darkest chapters of twentieth century, Jim Crow America, painting an intimate portrait of the heroic but doomed stand that pitted the National Guard against a small band of black men determined to defend the prosperous town they had built.

Dr. Jewell Parker Rhodes is the author of six adult novels: Voodoo Dreams, Magic City, Douglass’ Women, Season, Moon, and Hurricane, as well as the memoir Porch Stories: A Grandmother’s Guide to Happiness, and two writing guides, Free Within Ourselves: Fiction Lessons for Black Authors and The African American Guide to Writing and Publishing Non-Fiction. Jewell is also the author of seven books for youth including the New York Times bestsellers Ghost Boys and Black Brother, Black Brother. She has won the American Book Award, the Black Caucus of the American Library Award for Literary Excellence, and the Jane Addams Peace Association Book Award. Jewell is the Founding Artistic Director of the Virginia G. Piper Center for Creative Writing and Narrative Studies Professor and Virginia G. Piper Endowed Chair at Arizona State University. She was awarded an Honorary Doctorate of Humane Letters from Carnegie-Mellon University. She lives in Seattle, Washington.

"A mystical tale, full of spirits....an exciting and moving novel...plunging through complex ideas and relationships without neglecting any of them." — San Francisco Chronicle

"Jewell Parker Rhodes's characters hover. They dance and sing and cry and whisper secrets in your ear." — Emerge

“Magic City is one of those fine novels that one reads not because right makes might, because good does not triumph, but the book is read because we need to remind ourselves of the sad failure to safely, thoroughly, integrate America’s human community.” — Flagstaff Review

“As in Voodoo Dreams, Rhodes calls upon her talent for summoning up the literary device called magical realism.” — Mesa Tribune

“A combination of history, mystical happenings and murder makes this a thrilling read.” — Newton [Massachusetts] Tab

“With precise detail and fully drawn characters, Jewell Parker Rhodes has created a novel that brings us closer to the truth about our country and ourselves. These are the truths we should be seeking. This is the place to find them.” — Susan Straight, author of I Been in Sorrow’s Kitchen  and Licked Out All the Pots and The Gettin Place

“In Magic City, Jewell Parker Rhodes has made a tragic American story come vividly to life and has made these people—black and white and red, rich and poor, educated and illiterate—all achingly human. Rhodes must be commended for bringing such an important story front and center, and for making it as instructive and as moving as it is horrific.” — Randall Kenan, author of Let the Dead Bury Their Dead  and A Visitation of Spirits

“Jewell Parker Rhodes’s Magic City takes an ugly chapter of American history and turns it into a human tale of vulnerable people with imperfect motives and skewed vision, people who interact in dire ways with monumental consequences…. I could not, would not put this book down, not even after its last searing sentence.” — Julianne Malveaux, author of Sex, Lies, and Stereotypes

“We’ve seen Jewell Parker Rhodes use magic before to explore the meanings of, and urge drama from, history, and her approach here to the evocative and outrageous events of 1921 shows us that magic can cut two ways. Rhodes writes about our common human plight with a powerful dramatist’s voice; she has created with Magic City a clear open window on a rueful day.” — Ron Carlson, author of Plan B for the Middle Class

“Magic City is a victory against amnesia. One will remember Tulsa, 1921! This book captures the literary magic of a woman who is fast becoming a bright and shining star. Not even Houdini could create more wonder.” — E. Ethelbert Miller, editor of In Search of Color Everywhere:  A Collection of African-American Poetry