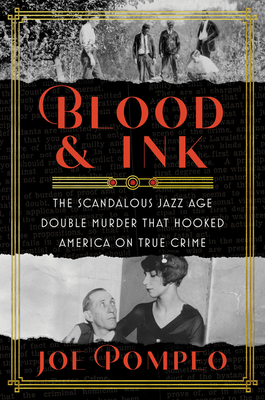 Blood & Ink is among 2022’s best works of true crime. --The Washington Post

Vanity Fair’s Joe Pompeo investigates the notorious 1922 double murder of a high-society minister and his secret mistress, a Jazz Age mega-crime that propelled tabloid news in the 20th century.

On September 16, 1922, the bodies of Reverend Edward Hall and Eleanor Mills were found beneath a crabapple tree on an abandoned farm outside of New Brunswick, New Jersey. The killer had arranged the bodies in a pose conveying intimacy.

The murder of Hall, a prominent clergyman whose wife, Frances Hall, was a proud heiress with illustrious ancestors and ties to the Johnson & Johnson dynasty, would have made headlines on its own. But when authorities identified Eleanor Mills as a choir singer from his church married to the church sexton, the story shocked locals and sent the scandal ricocheting around the country, fueling the nascent tabloid industry. This provincial double murder on a lonely lover’s lane would soon become one of the most famous killings in American history—a veritable crime of the century.

The bumbling local authorities failed to secure any indictments, however, and it took a swashbuckling crusade by the editor of a circulation-hungry Hearst tabloid to revive the case and bring it to trial at last.

Blood & Ink freshly chronicles what remains one of the most electrifying but forgotten murder mysteries in U.S. history. It also traces the birth of American tabloid journalism, pandering to the masses with sordid tales of love, sex, money, and murder.

Joe Pompeo is a correspondent at Vanity Fair, where he covers the media industry. He previously worked at publications including Politico and The New York Observer, and his writing has appeared in The New York Times, Bloomberg Businessweek, the Columbia Journalism Review, and elsewhere. He lives in Montclair, New Jersey, with his family.

“Blood & Ink is an addictive whodunit and a vivid depiction of a crime that gripped a generation of newspaper readers.”  — New York Times Book Review, Editor’s Choice

"Engrossing . . . Pompeo's book is as much about the rise of tabloid journalism and the American public's appetite for lurid true-life tales as it is about the crime itself." — Wall Street Journal

“Joe Pompeo vividly brings to life all of the color, drama, and intrigue of a century-old murder case that continues to baffle investigators to this day. Set against the backdrop of a form of journalism that would metastasize in the decades that followed, BLOOD & INK is a deft piece of investigative reporting and storytelling that refuses to lose its grip on the reader.” — Bryan Burrough, bestselling co-author of Barbarians At the Gate and Forget the Alamo

“Pompeo expertly tells the rip-roaring tale of a century-old murder and the ongoing mysteries surrounding the deaths of a minister and his choir-singer lover. Pompeo also shows how the rise of the New York City tabloids kept the scandal alive from one generation to the next. I couldn’t put it down. You won’t be able to either.” — William D. Cohan, bestselling author of House of Cards

“Pompeo brilliantly presents one of the most fascinating cases in the annals of true crime, the Hall-Mills murders. Pompeo investigates a story that fuses religion, betrayal, greed, and adoration, which offers us a complex and tragic portrait of a love story that seemed almost doomed from start.” — Kate Winkler Dawson, author of American Sherlock: Murder, Forensics, and the Birth of American CSI

“A compulsively readable account of a sensational unsolved double murder a century ago . . . Pompeo provides the definitive account of the murders. This is essential reading for true crime buffs.” — Publishers Weekly (starred review)