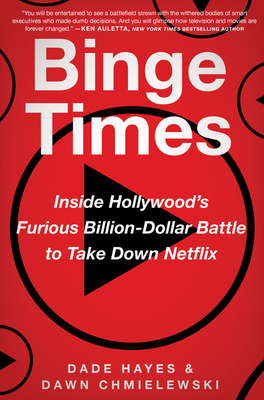 The first comprehensive account of the biggest wake-up call in the history of the entertainment business: the pivot to streaming. Go inside a disparate group of media and tech companies -- Disney, Apple, AT&T/WarnerMedia, Comcast/NBCUniversal and well-funded startup Quibi – as they scramble to mount multi-billion-dollar challenges to Netflix.

After spotting Netflix and the deep-pocketed Amazon Prime Video a decade’s head start, rivals from the tech and start-up realm (Apple, Quibi) and traditional media (Disney, WarnerMedia, NBCUniversal) all decided to move mountains to enter the streaming game. At a cost of billions, each went after their own piece of the market, launching five new services in a seven-month span. And just as the derby was heating up, the coronavirus pandemic arrived, a black-swan event bringing short-term benefits but also stiff challenges.

The battle for streaming supremacy may end up having more than one winner, but the cost and disruption to decades-old business models have also produced a lot of losers. Binge Times reveals the true costs of the vision quest as companies are turned inside-out and repeatedly redraw their org charts and strategic plans. Stretching from Silicon Valley to Hollywood to Wall Street, it is a mesmerizing, character-rich tale of hubris and ambition, as the fate of a century-old industry hangs in the balance.

Dade Hayes is the business editor at Deadline. Along with two previous books about entertainment, he has written for the New York Times, Variety, and the podcast Business Wars. He lives in Larchmont, New York.

Dawn Chmielewski is an entertainment business correspondent for Reuters and was previously a reporter for the Los Angeles Times, Recode, and Forbes. She lives in Southern California.

“Silicon Valley’s arrival in Hollywood—initiated by Netflix, and followed by Amazon, Apple and others—set off the most momentous disruption to the entertainment industry since the advent of television. Hayes and Chmielewski give readers a ring-side seat to all of the fear, agita and corporate mud-slinging wrought by the shift from movie screens to laptops, setting up the stakes of a business-slash-cultural war that is far from over. This sharply-reported, colorfully-detailed yarn is a must-read for anyone wondering how Hollywood lost its grip.”
— Nicole Laporte, author of Guilty Admissions and The Men Who Would Be King

“For years a debate has raged over whether content or distribution is King. This timely, engrossingly written and deeply reported book, crowns the new King: streaming. Month by month, year by year, Binge Times takes readers inside the momentous and disruptive battle for streaming supremacy among such media giants as Netflix, Apple, Amazon, Disney, Warner, NBC. You will be entertained to see a battlefield strewn with the withered bodies of smart executives who made dumb decisions. And you will glimpse how television and movies are forever changed.”
— Ken Auletta, New York Times bestselling author

“Hayes and Chmielewski zoom way out to an altitude that offers the entertainment industry something it has sorely lacked: Perspective. The expertise and analysis in this book might just help us all avoid making the same sisyphean mistakes of the last two decades. But only if you read it.”
— Evan Shapiro, producer and former president of Sundance TV, IFC, and Pivot

“Binge Times is a vivid behind-the-scenes account of the corporate streaming wars that changed the face of popular entertainment.”
— Peter Bart, author and producer, Deadline editor-at-large

“This book was better than anything I’ve read in detailing how this new era of streaming evolved so quickly. Filled with colorful details and insider stories, Hayes and Chmielewski chronicle how the media landscape arrived at the ‘binge times’ we’re all living in and why the biggest players in the business made the choices they made.” — Marshall Lewy, Chief Content Officer, Wondery

“A revealing, highly readable look at the making of the modern home-entertainment environment.” — Kirkus Reviews

"This excellent book takes readers deep behind the scenes at Netflix and its challengers, showing us the people who had the ideas, made the decisions, and, in some cases, took the blame. In their writing, in their perceptive analyses, and in their vivid portrayal of a large cast of characters, Hayes and Chmielewski's book easily rivals such business-book staples as Barbarians at the Gate, The Informant, and Too Big to Fail....Riveting." — Booklist

“Binge Times breaks down the absolute mayhem of the streaming wars in a way that even a casual industry watcher can digest. It is a thoroughly reported work that makes for a compelling read.” — Broadcasting+Cable