Lost in Shangri-La: A True Story of Survival, Adventure, and the Most Incredible Rescue Mission of World War II (Paperback) 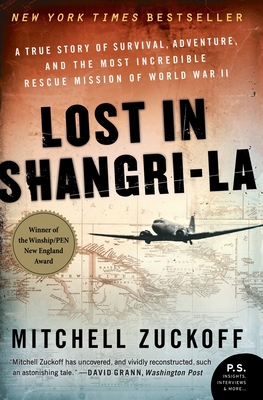 “May 13, 1945. Twenty-four U.S. soldiers stationed in Dutch New Guinea pack into a C-47 for a sightseeing trip over a lush, mysterious, newly discovered valley. Unable to navigate the dense tropical clouds and steep mountain faces, the pilot crashes the plane deep in uncharted jungle. Only three injured passengers, including a WAC, survive. How they attempt to save themselves while caught between Japanese troops and hostile headhunters, what happens when they encounter a Stone Age tribe that had never seen white men or women, and how they are finally rescued is at the heart of this amazing true story.”
— Lisa Howorth, Square Books, Oxford, MS

A New York Times bestseller, the extraordinary World War II mission to rescue survivors of a U.S. military plane crash in an isolated corner of the South Pacific, and the ancient indigenous tribe members that aided those stranded on the ground in this "Shangri-La."

Mitchell Zuckoff is the Sumner M. Redstone Professor of Narrative Studies at Boston University. He covered 9/11 for the Boston Globe and wrote the lead news story on the day of the attacks. Zuckoff is the author of seven previous works of nonfiction, including the number one New York Times bestseller 13 Hours: The Inside Account of What Really Happened in Benghazi, which became the basis of the Paramount Pictures movie of the same name. His earlier books also include the New York Times bestsellers Lost in Shangri-La and Frozen in Time. As a member of the Boston Globe Spotlight Team, he was a finalist for the Pulitzer Prize in investigative reporting and the winner of numerous national awards. He lives outside Boston.

“[A] gripplingly cinematic account. . . . A remarkable cast of characters. . . . A.” — Entertainment Weekly

“This is an absorbing adventure right out of the Saturday-morning serials. . . . Lost in Shangri-La deserves a spot on the shelf of Greatest Generation nonfiction. It puts the reader smack into the jungle. ” — Cleveland Plain Dealer

“Zuckoff transforms impressive research into a deft narrative that brings the saga of the survivors to life.” — Publishers Weekly (starred review)

“[An] engaging story. . . . This excellent book will be enjoyed by anyone who loves true adventure stories.” — Library Journal (starred review)

“A riveting tale in the hands of a good storyteller. . . . LOST IN SHANGRI-LA is the most thrilling book, fiction or nonfiction, that I have read since I can’t remember when.” — Seattle Times

“Mitchell Zuckoff has uncovered, and vividly reconstructed, such an astonishing tale. . . . Zuckoff skillfully builds narrative tension and deft character portraits. . . . . He has pulled off a remarkable feat — and held the reader firmly in the grip.” — David Grann, Washington Post