The Eve of Destruction: The Untold Story of the Yom Kippur War (Paperback) 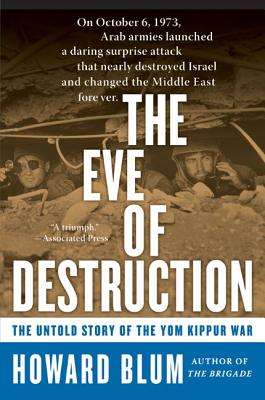 On October 6, 1973—Yom Kippur, the holiest day of the Jewish calendar—the Arab world launched a bold and ingeniously conceived surprise attack against Israel. After three days of intense, bloody combat, an unprepared Israel was fighting for survival, while the Arabs, with massive forces closing in on the Jewish heartland, were poised to redeem the honor lost in three previous wars.

Based on declassified Israeli government documents and revealing interviews with soldiers, generals, and intelligence operatives on both sides of the conflict, The Eve of Destruction weaves a suspenseful, eye-opening story of war, politics, and deception. It also tells the moving human tale of the men and women who fought to maintain love and honor as their lives and destinies were swept up in the Yom Kippur War.

Howard Blum is the author of the New York Times bestseller and Edgar Award winner American Lightning, as well as Wanted!, The Gold of Exodus, Gangland, The Floor of Heaven, and, most recently, a 2018 New York Times Notable Book: In the Enemy's House. Blum is a contributing editor at Vanity Fair. While at the New York Times, he was twice nominated for a Pulitzer Prize for investigative reporting. He is the father of three children, and lives in Connecticut.

“One of the most moving accounts of the war to appear in many decades.” — Washington Post